Here's how I set up an Assetto Corsa server running on an Azure VM.

Assetto Corsa is a racing simulation game which supports online multiplayer play. All of the lobbies are community-run. I wanted to set up a private server to play among some friends, and so here’s how I did it.

You can definitely host this server on the same machine you play on! I chose not to do that so that everyone gets a fast connection to the server, independent of my internet speed, and so that I can keep the server on when I shut my machine off.

There are also places that will happily host servers for you, at a price. But, I have some free credits for server hosting, and so the low low cost of free is preferred.

1. Create an Ubuntu VM in Azure

Of course, any cloud VM would do just fine here. Here are the steps I followed to set this up in Azure.

While Assetto Corsa on PC is Windows-only, the server works on Linux too. I created a new Azure VM running the latest Ubuntu LTS release, since it’s what I like to use.

At first I used the B1ms spec server with 2GB of memory. After testing this for a few days, I realized this was way more than I needed. I was able to scale down to the B1ls spec server and it handled just fine with 4 people.

I recommend using SSH-based authentication, instead of password-based.

The default inbound port rules are fine to start. I left port 22 (SSH) enabled so that I can log in. The necessary ports for the server can be enabled once we get them from the config.

Note that by default, auto-shutdown is enabled. In my case, I know that I won’t always be running this server 24/7, and so this is actually a decent way to save on hosting costs for when I forget to shutdown the VM. If you want a more available server, I would recommend disabling this setting.

SSH into the server using the public IP address.

The Valve Developer Wiki provides some some great instructions for installing SteamCMD, as well as documentation in general.

Note that this first line was necessary, since I was running a 64-bit VM.

The wiki also mentions that this can run in Docker. In this case I didn’t feel it was necessary. These images are also community-maintained instead of from Valve themselves. It’s just more straightforward to run it on the VM normally.

This guide on the steam community for Assetto Corsa was helpful. Once SteamCmd was installed, I ran the following commands.

302550 is the AppId of the Assetto Corsa Dedicated Server.

I ran into this issue when I failed to include the +@sSteamCmdForcePlatformType windows arg. This happened even though this was on a Linux VM.

To fix this, I made sure to include this parameter when starting the SteamCMD CLI.

Once this was finished, the game files were available under the directory ~/.steam/steamcmd/assetto/

The acServer executable in this directory is the game server.

Assetto Corsa Dedicated Server by default uses the ports 9600 and 8081 with both TCP and UDP. These are specified in the cfg/entry_list.ini server config file. 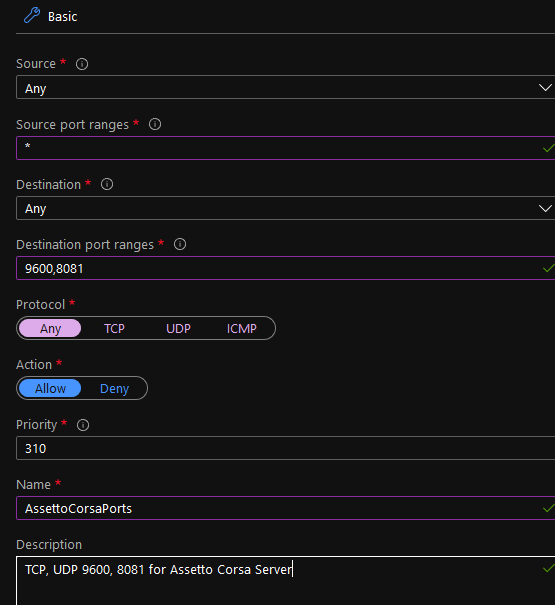 This was added from the Settings > Networking tab in Azure.

Once ports have been allowed, the ACDS should be able to “phone home”. The following output is what the logs should look like on success:

The “phone home” step allows for the central Assetto Corsa server to know about your server and so players can now search for your server using the in-game server browser window.

And if everything’s configured correctly, players should now be able to connect without any trouble.

Now that the server is setup, the VM needs to be configured to start the server on boot. This way I don’t have to log back in each time for whatever reason.

I created the file with the contents: /etc/systemd/system/acds.service

The steam user was recommended by both of the guides linked earlier. This way the server runs with minimal privileges.

Afterwards, I ran these commands:

Then I ran journalctl -fu acds to check the logs for the server to ensure it’s up as expected.

The command sudo systemctl restart acds will restart the server.

While you can edit the ini files directly, it’s much easier to just use the GUI to do it.

I found that I had to install the server software in Steam, copy the game files to be under the Assetto Corsa game install directory, and then I could copy the config onto my main machine, specify settings, and then update the server config with SCP.

While it’s not the most turn-key solution, it’s easier than editing the .ini files by hand.