How I added (possibly too much) automation to my apartment. 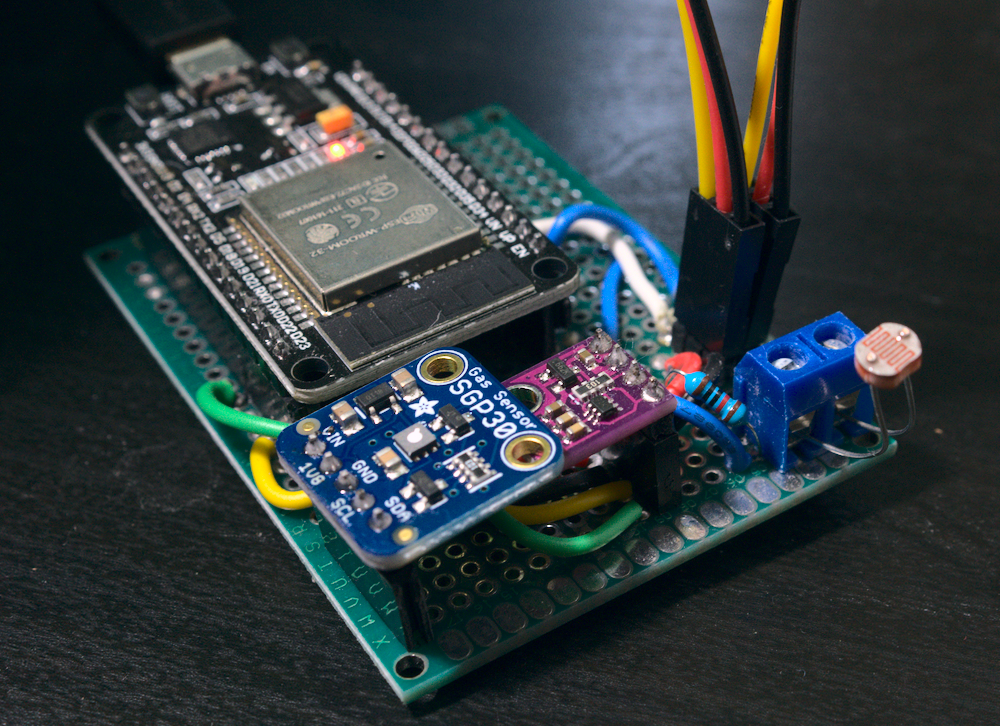 This is a summary of my experience setting up my own home automation and security system using Home Assistant and ZoneMinder.

From anecdotal evidence about the problems with IOT, I’ve successfully avoided this trend (for now):

I first started to mess with this stuff when I experimented with RGB IOT Lightbulbs, which I’ve written a bit about before here. Maybe this was a slippery slope.

The Initial Need for Security

I had just moved in to a new apartment, and wanted to set up some sort of a security system for peace of mind while I’m out at the office.

I absolutely did not want:

At a minimum, all I needed was a camera to record any activity that happens while I’m not home. Features like real-time notifications or offsite backups were a plus.

Home Assistant is an open source home automation platform that lets you bridge together various services and devices using self-hosted infrastructure. Many users run this on a Raspberry Pi.

I had first learned about Home Assistant from a talk at LinuxFest Northwest.

I think the community support around Home Assistant is the best part. [It integrates with tons of IOT devices and services.][ha-integration],

ZoneMinder is an open source video surveillance system which can record from multiple IP cameras and detect activity. It’s meant to scale up for several cameras, but I only use it to record video from a single IP camera.

While my IP camera does include a built-in record function which saves to an SD card, I don’t want to depend only on that one card. ZoneMinder enables me to backup footage on a more reliable server, but also monitor the status of any cameras I have connected.

I definitely do not want my cameras showing up on Shodan. To help remedy this, I’ve created a dedicated SSID just for IOT devices, which isn’t allowed to connect outside of my LAN. Hopefully this will help prevent these devices from showing up with a public IP, or from being able to “phone home.”

At one point, I had a stack of 3 Raspberry Pi’s sitting on my desk, running various services: 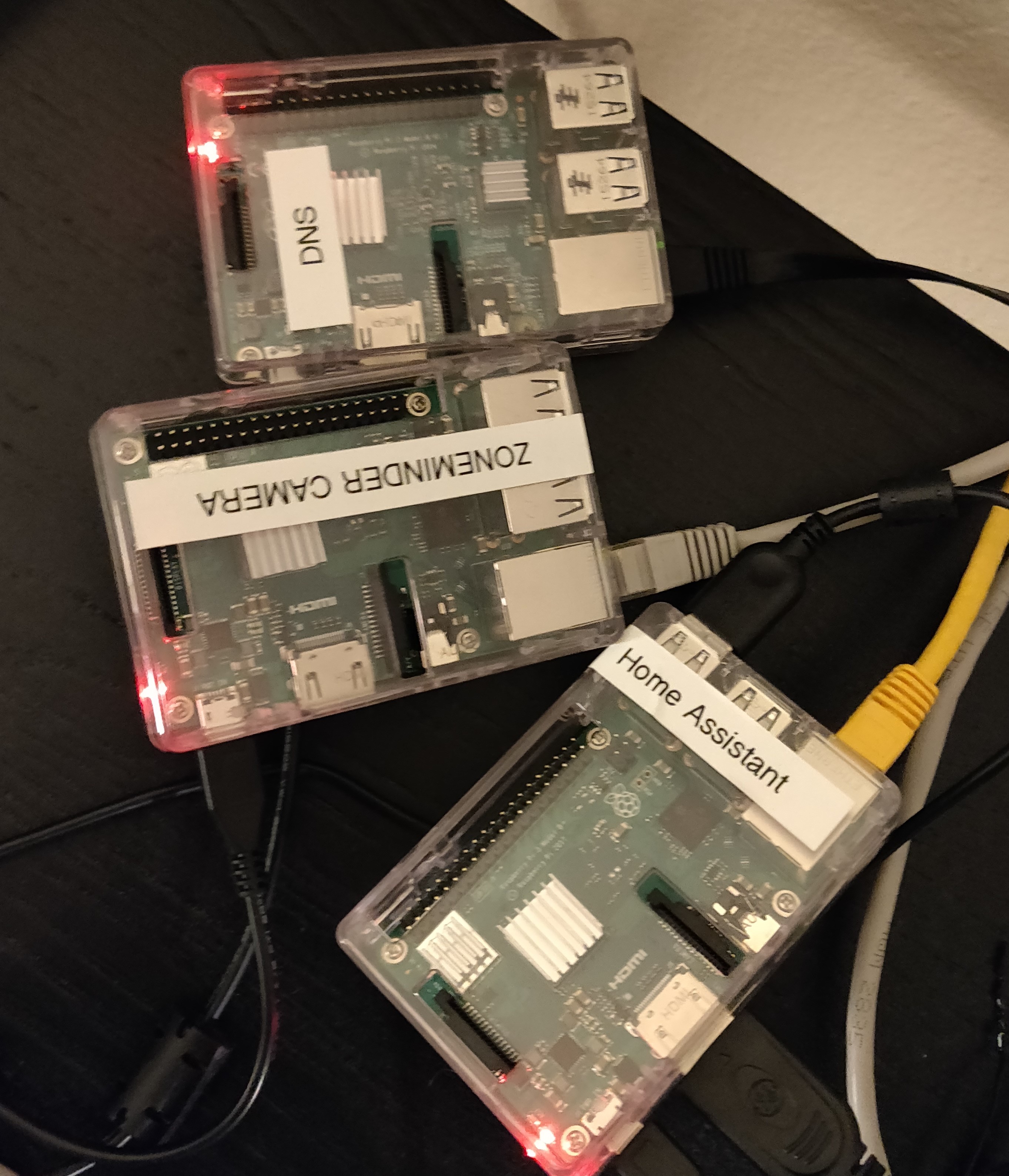 This worked okay for a while. It was clear that ZoneMinder could benefit from something with a bit more power, luckily I was only using a single camera. However, after less than a year with this setup, the SD card for that Pi completely died. I’m not sure exactly what the cause might have been, but I speculate that the amount of disk usage from ZoneMinder could have led to this.

I’ve since moved my ZoneMinder setup to a Debian server on an old Lenovo desktop PC, with an actual hard drive. Moving off of an SD card has other benefits too, I now have more storage capacity.

Why not use a VM in the cloud? This option could work, but for a few reasons I chose against it. Currently I use 433 MHz radio connected to my Home Assistant Pi, which requires access to the GPIO. ZoneMinder would generate a lot of traffic and more storage capacity is better, which an add to the expense of a VM. I already owned all of the equipment that I’m using, so the only operating cost is my electricity bill.

At first it might seem that all I need is ZoneMinder to monitor my IP camera while I’m out of the house. I definitely could, but this poses a few issues:

Home Assistant’s frontend is more robust than ZoneMinder’s, so I feel better about exposing this server publicly. In addition there are integrations available for 2FA, which is more than ZoneMinder offers. My router supports DDNS, so I’m also able to register a subdomain on my DDNS provider and set up HTTPS certs. With all of this, I can use Home Assistant’s mobile-friendly interface or Android app to access my camera remotely. HA allows me to remotely toggle ZM’s recording status, and can let me view a timeline of detected events.

Using Home Assistant’s mobile app, I can track my current location using my phone. (Previously I used OwnTracks.) With this, I set up an automation that starts recording on my cameras if I’ve been outside of a radius surrounding my home for more than a few minutes. And similarly, I set up the reverse to disable recording once I return home.

Once that was established, I could expand these automations even further. When integrated with Twilio, I could use the event detection in ZoneMinder to text myself images from the camera. A great demonstration for why it’s great to have this nearly all open-source ecosystem: I was able to implement parts of this feature in HA’s Twilio plugin itself.

What else can Home Assistant do?

After using Home Assistant and ZoneMinder for a few weeks, I found it very useful for checking on the status of my house while I’m away. However, I had a few observations about the usability of this system so far:

In addition, one flaw of this system is that it doesn’t allow me to verify that the door is locked. On one occasion I had left the house in a hurry to realize upon coming home that I had forgotten to lock up. While I don’t anticipate this issue reoccuring, this peace of mind is nice to have.

door-monitor is the project I created to accomplish this. (Note that I wasn’t aware of ESPHome at the time, which seems like it could do everything here but better.)

It uses an ESP32 dev board connected to two reed switches which are taped on to the door frame and the door lock. When either one opens, the ESP32 wakes up from deep sleep mode and logs to a Flask server to collect this data. 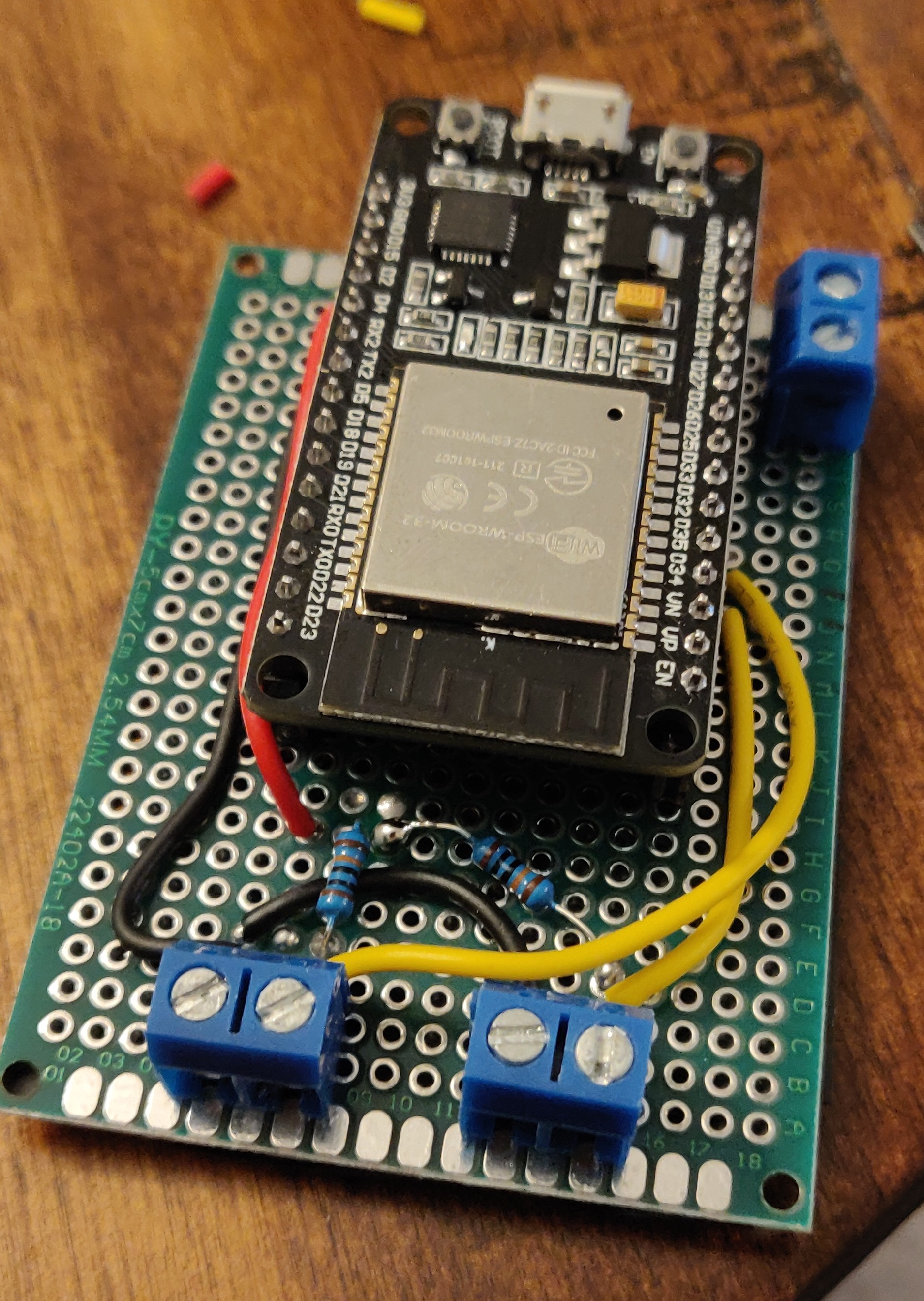 The Flask server acts as a proxy to forward this information along to multiple sources, including Home Assistant but also a Discord webhook. The Discord webhook was used as a faster and free alternative to Twilio SMS notifications. 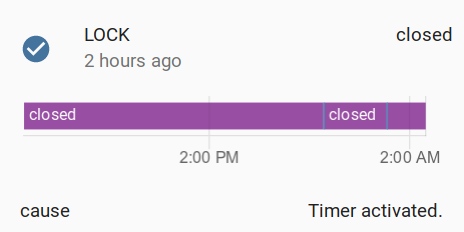 Once this was integrated with Home Assistant, I could start doing some pretty cool stuff with it. Some automations that I had configured around this will text me if the door or lock state changes if I’m away from the house, and also text me if I have been away from the house for more than a few minutes without locking up.

This system works great, just with a few downsides. It looks vaguely like a bomb is taped on to my door which doesn’t bother me too much, but has raised an eyebrow when I had maintenance come by. Also, while the ESP32 is known for being very power efficient, the dev board that I use isn’t. The system will happily burn through 4 AA batteries within a few weeks. I plan on fixing the power consumption issue by using a TinyPICO board instead of a ESP32 dev module, apparently it’s 3.3V regulator uses a lot less power. Switching to rechargeable batteries has been a must.

This video has been really inspirational for a number of projects I’ve done. At one point, I had set up a reed switch on a door in my school’s lab, so that one in every 30 times it was opened, it played a seinfeld bass riff over the PA system in the room. We left it running for a few months.

Naturally I wanted the same thing at home. I was able to quickly spin up a hacked-together Flask server (using the debug server, because it really doesn’t matter) to play sounds over a speaker when triggered over HTTP. This fit together with the existing system really well.

This was extended to also serve as a way to play text-to-speech remotely. Once I hooked it all up with Home Assistant, I could queue sounds and say arbitrary text to a speaker sitting in my room. Now, if the door opens while I’m away from home, the speaker can warn: "Intruder alert! You are being recorded."

IOT lights are pretty cool, but their price isn’t. I’m not willing to spend a good chunk of change to buy smart bulbs for everything in my house, since that price tag would add up quick. Also, that just sounds like a headache.

433 MHz radio is a pretty widely established standard for universal garage door openers, cheap security devices like window reed switches, and more. The Home Assistant community is aware of this, and has made efforts to integrate with these cheaper devices.

There exist a few ways that they can connect HA to 433 MHz:

Out of these, I chose to connect to the RPi GPIO. This seemed to be the cheapest option, and potentially the easiest.

I’m not a fan of RFLink, for a number of reasons. Their closed-source approach seems to be causing them issues:

Since some were asking, yes the project is still alive. However, we get way more support requests than we can handle

I like being able to contribute back to the tools that I use without blindly emailing a random gmail address and waiting for a response.

I decided against the Sonoff RF Bridge because I didn’t want to deal with flashing the Tasmota software. Also, I think at the time the devices were out of stock.

I already was using a RPi, so just making a board to sit on the GPIO seemed like the best solution.

Home Assistant includes built-in integration with rpi_rf, which is a library for using RF with the RPi GPIO. I found it really simple to configure.

However, in it’s current state, the only issue I found was that the Home Assistant integration doesn’t (yet) support receiving codes. It looks like there’s some way to fix this, which I haven’t tried fully yet.

To work around this, I’ve resorted to installing pilight and connecting it to Home Assistant. This solution really doesn’t feel ideal, since I now have multiple ways to send RF codes, and I have to integrate with a whole other service just to get RF working.

On the plus side, Home Assistant and pilight integrate with each other pretty well.

I have a couple of house plants. Unfortunately, I forget to water them. (There’s a common trend behind these motivations.) 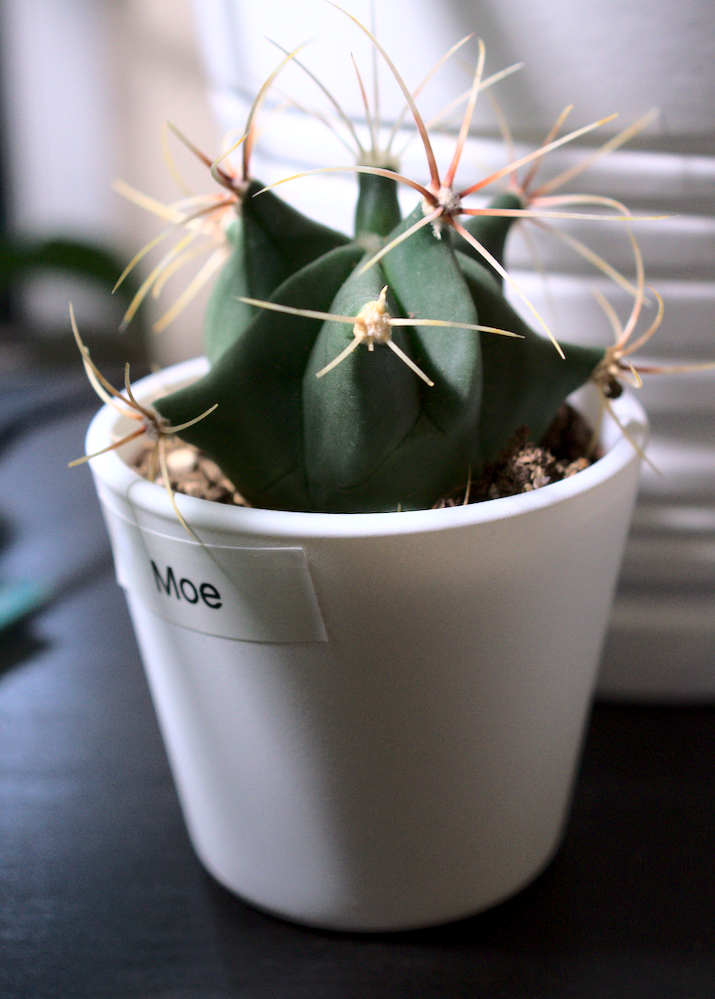 In addition, because my place is somewhat dark, they need some extra light from a fancy plant bulb. Using the 433 MHz wall switches from earlier, I’m able to turn off this bulb with a timer, controlled by Home Assistant. (The bulb produces an annoying high-pitched ringing noise, so I don’t leave it on constantly.)

ESPHome is a system for ESP8266/ESP32 that lets you integrate with sensors and services by just writing some YAML. It’s designed to integrate directly into Home Assistant.

Some benefits that this has over something like my door monitor project:

In an afternoon I was able to solder up a board with a bunch of sensors:

I use soil moisture sensors that stick directly into the plant’s soil to read out a relative humidity. It outputs an analog signal corresponding to the humidity. The value doesn’t mean a whole lot unless it’s calibrated, which I haven’t bothered to do carefully yet. 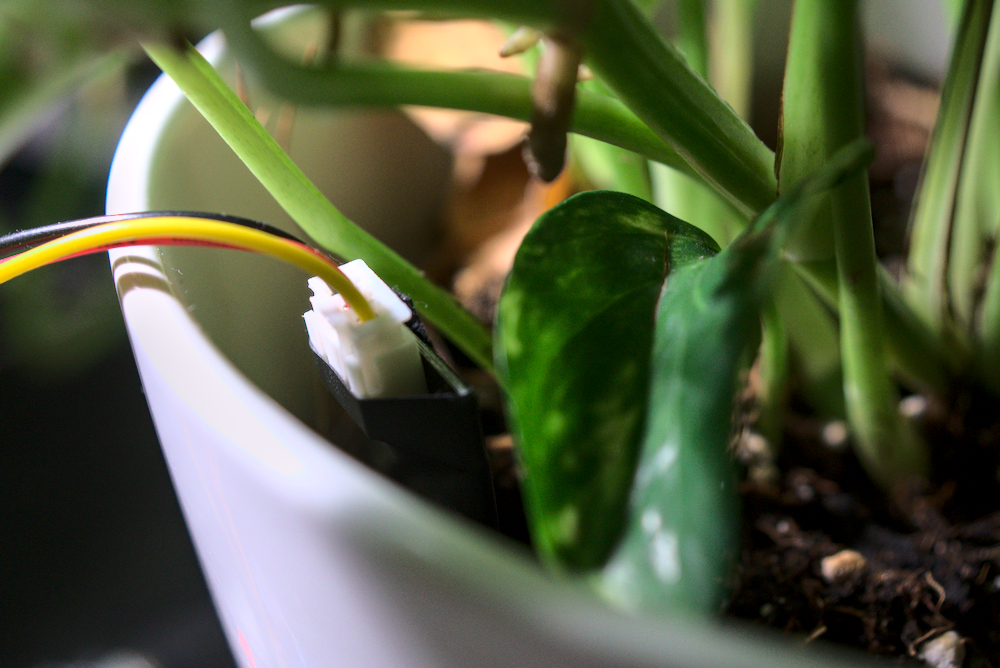